How to counter a powerful dominant narrative 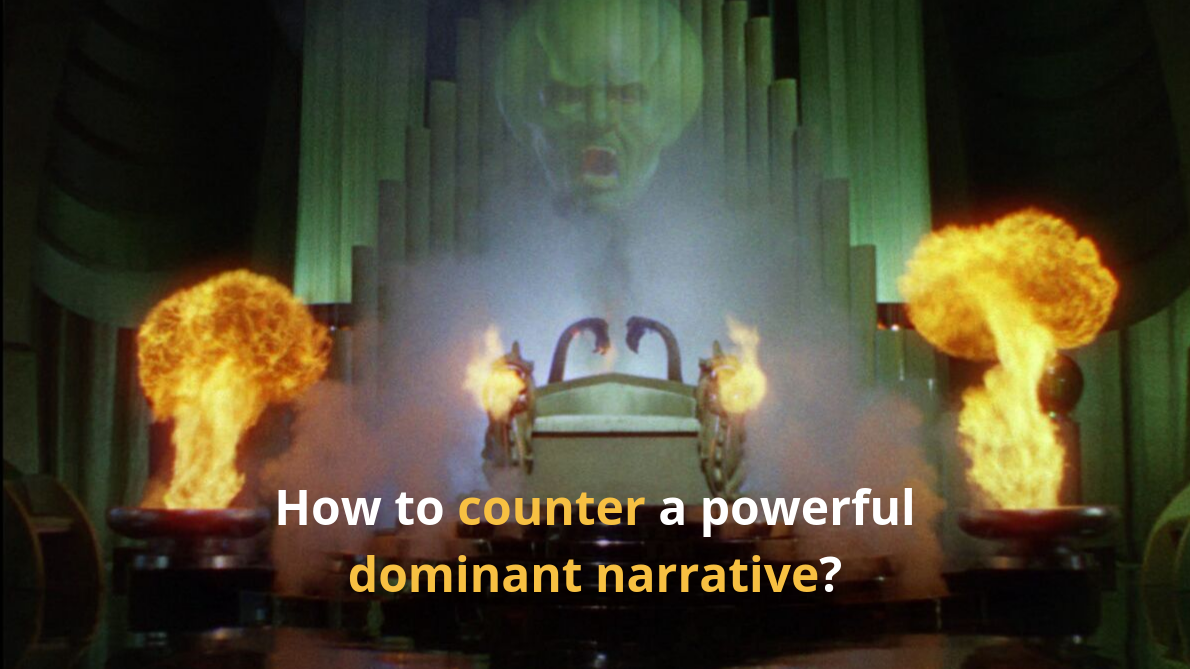 We all know that the 45th President dominates the political narrative. We saw in the "Myth of Trump" and "Homer Trump" videos how he draws on five of the American shared cultural myths: Cowboy (Strongman), Moses the liberator, Poor Boy gets Wealthy (Apprentice Series), Rot at the Top and most frequently Mob at the Gates - we are being invaded. Together these have led to the domination. We call Trump’s use of story to persuade, "red rhetoric". (See links to Trump posts at the end)

How do you counter such a lead?

Because "people feel before they think" you cannot counter with facts, with arguments and with any typical kind of persuasion. People simply dismiss facts that don't fit their chosen narratives. It's called cognitive dissonance. The only approach that does work is to counter a story/myth with another story/myth.

This is why what happened at the latest Democratic debate in Houston was so significant. Kamala Harris drew on one of US cultures most familiar myths to draw on the Wizard of Oz. Kamala's powerful suggestion was that the 45th President reminded her of the Wizard, the apparently powerful figure that Dorothy and her motley crew are pursuing to give them what they need.

Why is this so significant?

Firstly, for the first time, a Democrat is attempting to use "red rhetoric". This approach implicitly recognises that in situations of complexity and uncertainty, voters use 'heuristics' which simplify the complexity, and tap into emotions by drawing on a culture's shared symbols, stories and myths.

Firstly, it is US cultures classic re-framing of the archetype of the STRONGMAN. In the Oz story as we know all hope is vested in the Wizard. He is the solution. But as we know, when Toto, Dorothy's dog pulls back the curtain and the strongman is exposed as a "Humbug". The allegory is obvious.

It is a framing of Trump as Humbug!

Secondly, and importantly, the whole point of the story is so empowering. Dorothy and her three companions all have serious flaws. The lion needs courage, the scarecrow a brain and the tin man a heart, and Dorothy has no way of getting back to Kansas and her family. But come the end, as we learn, what they needed they had all along. It was within each one of them.

The Oz story taps in so powerfully to another core American myth - that of total self reliance and independence. The message being, of course, we don't need a Wizard. They did not need the Wizard, only themselves and each other. The choice of the Oz Myth for the Democrats is a message to every American. It offers a serious option. This is powerful because it is countering a dominant narrative with another powerful and shared narrative.

Thirdly, each one of these figures are very loveable characters. Why? What makes someone loveable. We admire perfection. We love vulnerability. Dorothy and her companions are certainly loveable, precisely because they are flawed and vulnerable. For political neutrals, drawing on imagery of loveable characters is compelling. Neutrals may respect the 45th President but much of his behaviour would not be described as 'loveable'!

Finally, at the core of the Oz story is one of unity in diversity. Dorothy, a lion, a scarecrow, a tin man and Toto the dog is nothing if not a motley crew. And yet, despite the differences, they all get what they most need. The Wizard of Oz myth is a reminder of that great motto of the United States, E pluribus unum, out of many one! At a time when it seems the American nation is pulling itself apart, here is a story leaves us remembering what we have in common.

So Kamala Harris, for many reasons, invoking the Wizard of Oz, might just be the right way to go.

There are more cultural myths there that the Dems might look at if they are open to moving beyond their favoured "blue rhetoric"!

Political Interpretations of the Wizard of Oz...

The notion that the Oz myth has political meanings when it is viewed allegorically has a long heritage. For example, Dorothy, naive and young as an allegory for the American people, as every woman, led astray by events. The Emerald City as symbolising a fraudulent financial sector where money pretends to have value. It is led by a scheming politician (the wizard) who uses all manner of trickery to fool people that he is wise and on their side. When in truth he is a selfish self absorbed humbug. Allegory can say so much in an indirect manner.