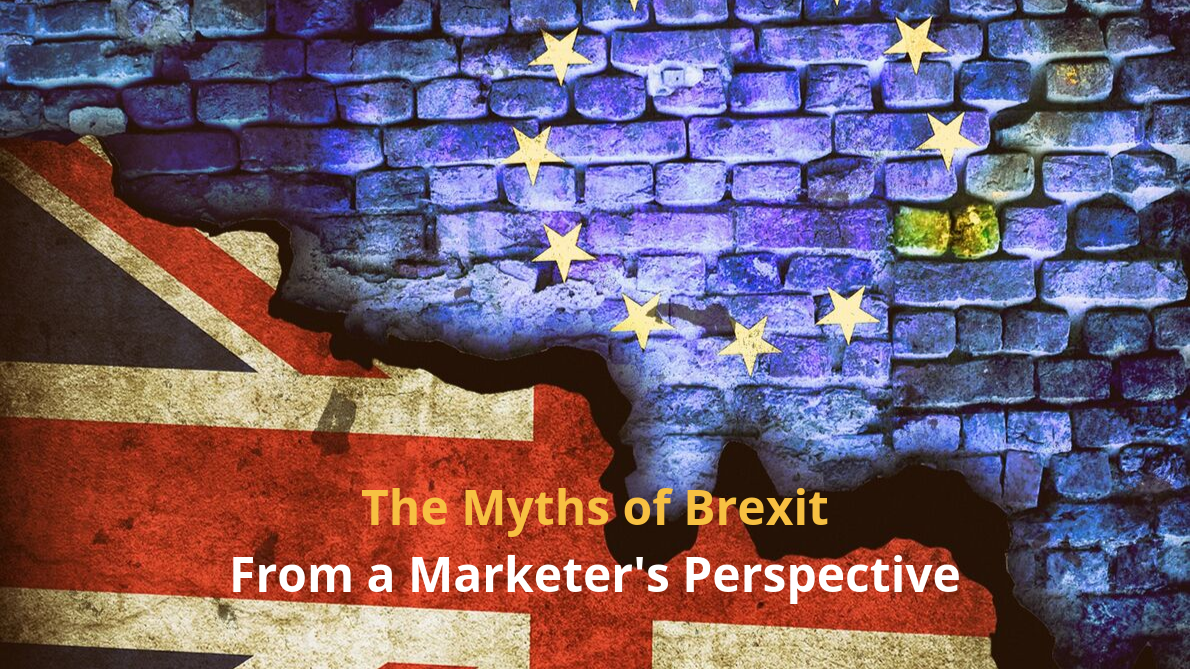 From a Marketer’s Perspective

THE USE OF CULTURAL MYTHS

How do we make decisions in situations of great complexity, multiple choices, conflicting points of view and considerable uncertainty? What we know from fast moving consumer goods studies and from political decision making is we use simplifying heuristics, which are a shortcut to deliver a solution that is ‘good enough’ in the limited time available.

We also know from Daniel Kahneman, the decision scientist and others, that we have an autopilot, which he calls system one, that makes decisions in a rapid, intuitive, associative way that is implicit and unconscious.

The most powerful of the unconscious associations are the familiar emotions shaped by the stories and myths we have internalised from childhood. They are in essence, our foundational meaning structures.

What we have to ask is what of these stories and myths played a role in the decision making made by the British people in the 2016 referendum. One approach used by Cameron and colleagues, which is deeply embedded in their British privileged psyche, is the belief in the power of argument, in the power of a good rational argument to persuade. The skills of rhetoric lived in their privileged families and the debating societies of Eton and Oxford. This is what we call blue rhetoric. This is the myth of the enlightenment, the myth of science.

Another very different approach is to learn from Kahneman, and other decision scientists, is the role of emotion in decision making, in the power of collective meaning structures. This is ‘red rhetoric’.

One of the foundational myths in Britain is that of ‘mob at the gates’ and that we are in imminent danger of being invaded. The ‘mob’ is some aggregated 'other', typically described in terms of their least desirable actors. This is familiar to the British: various invasions from the Romans, Vikings, Spanish Armada, the French, the Nazis and now, for Brexit, it’s the refugees from the middle east that are about to invade. Not said but implied, most of these are in Al Qa’idah and fear has always moved the masses.

The next foundational myth is ‘rot at the top’. This is the UK House of Cards series, it’s the “Yes Minister” narrative. A lot of the time crafted, British Institutions and Customs are there to counter the danger of abuse of power. But narrative and myth also reminds us that power corrupts. In the Brexit myth, it was a rottenness that was less about ethics (as in the Trump narrative) and more about efficacy and chronic bureaucracy in Brussels.

The Irish have more experience of referendums than the British. They are very familiar with the voter whose choice is driven by “I’m against whatever the Government is for”! This is the timeless choice of the rebel, the David and Goliath Myth. The vote is essentially a protest vote. There the choice is made with no regard to what is actually being asked.

Yet another myth utilised by the ‘leaver’ was the myth of the thief and a narrative that you are being robbed by the elite who are perpetually visiting injustices on you, the ordinary citizen. It is at the heart of the Robin Hood story. And so the Sheriff of Brussels is robbing £350 million each week that we can ensure goes back to the beloved NHS when we leave.

Even more foundational, however, than all of these core narratives above, is that outlined in a brilliant book by the well-known author and journalist Clifford Langley, “Chosen People: the big idea that shapes England and America". Langley talks about the foundational story shaping English (and US) identity, which is that of the Jews and the Old Testament. The specific myth is that of Moses and the Liberation from Egypt.

Of particular relevance is how the Old Testament story was invoked by Henry VIII, as he was freeing himself from the clutches of Rome and Catholicism (Egypt in the Myth) to get the divorce he sought. The whole point of the Moses story he invoked is that the English were God’s Chosen People. Langley argues that the English (and Americans) have a God given sense of unique destiny – manifest destiny. And that this chosen-ness is hard wired ever since, in both the US and UK. And that this too was a factor in Brexit thinking.

The great 20th century historian Peter Hennessey, in his recently published booked “Winds of Change”, suggests that Brexit is less about Empire nostalgia and more about a British unwillingness to settle for being ordinary, prosaic and mundane. After all, how could God’s chosen people be ordinary. It just doesn’t fit.

The ‘leavers’ it has to be said were far more adept and focused at the use of these 'red rhetoric' approaches. When all these mythic structures are put together, it’s perhaps surprising that the Referendum was not won by a bigger margin! The remainers simply weren't using 'red rhetoric' at all. For them it was a rational debate. They offered little or no opposition in the art of shaping collective sentiment using mythic structures

WHERE IS BRITAIN NOW?

It is led by a leader, Boris Johnson who is closely associated with these 'red rhetoric' communication strategies. But the British also live by another myth – the Myth of Cricket – a game governed by a set of rules, explicit and implicit. To break any of these is to destroy the game and that uniquely British expression, “it’s just not cricket”!

For many, the use of communication strategies were build on blatant lies such as the £350 million. Other discredited communication such as the image of the Syrians was also ‘just not cricket’ and certainly not conservative cricket! When the role of Cambridge Analytica and Dominic Cummins and his ‘red bus’ comes out there are many in the country who feel that the election was won in a way that was close to cheating. It was “not cricket”. And Cummins is currently under a criminal investigation!

The issue facing the British today is that the way in which the Referendum was won was, for many, deeply flawed. For a nation deeply suspicious of advertising anyway, that was, for many persuasion at its worst, deeply manipulative. But, the leave campaign won. And another cultural sentiment is that "we must accept the result". This is democracy. So, ‘this was not cricket’ meets ‘this is democracy’. It is also a huge cultural divide. It is a mess.

WHAT DOES HISTORY TELL US?

Whatever the outcome in the short term, the history of the Roman Republic gives us some indication as to what to expect. When the Gracchi brothers broke the traditions (rules) of the Roman Republic in pushing through urgent reform, they did it in such a way that they unravelled the twin Republican pillars of the separation of power and the limited term of office. In doing so they unravelled the unifying myths on which the Republic was based, the Rape of Lucretia and Romulus and Remus. The myths highlighted the dangers of the abuse of power. Myth inspired organisational structures and checks and balances.

Having lost the unifying myth (and associated structure) the result was six Civil Wars such as that between Caesar and Brutus, and this unrest lasted over 100 years. The emperor Augustus then delivered, via Virgil, another unifying myth. Virgil’s Aeneid was the unifying myth of the Roman Empire.

A UNIFYING MYTH - A WAY TO GO?

It seems then that when the unifying fabric goes the result is years of 'civil wars' whether cultural or more intense! What is it that unites? At the end of Game of Thrones, Tyrion Lannister chooses Bran the Broken as the King. Why? Because he has the best story.

If history teaches us anything, it would be that the British/English desperately need a unifying myth. The country, like America, is tearing itself apart. It has started and is facing cultural civil war. It could last a long time, as we learned from the Romans.

Maybe there is a way to go. As historian Dominic Sandbrook outlines in his book ‘The Great British Dream Factory’, “the British Empire has gone. We no longer matter as we once did. And yet there is one area in which we can legitimately claim superpower status: our popular culture”.

He reminds the British of JK Rowling and 400 million Harry Potter books sold; James Bond as the longest running film series in history; Lord of the Rings as the second best-selling novel ever: the Beatles as the best-selling musical group of all time. He also mentions how exceptionally good the British people are at advertising!

So even if the politicians and politics is unravelling itself with many of its institutions, maybe British popular culture and some of its great brands might point, like Virgil and Augustus did for the Romans, a way through the mess.

The British National imagination is remarkable. Surely the country’s music makers, its writers, its painters, its brand builders, might draw on its rich history and mythology to find some unifying mythology. Perhaps if a few sat down at King Arthur’s Round Table, drank mead and told stories……. might be a place to start!

And what if some of the great British Brands like Persil, Robinsons, Flora, British Airways, Marmite, Hovis etc stepped out of their category and offered some redemptive and healing myth making at this troubled time? Coca Cola, Budweiser and Johnnie Walker all have given us messages that act to heal and restore. Why not some British Brands? And that brilliant cultural imagination, comedy and music?