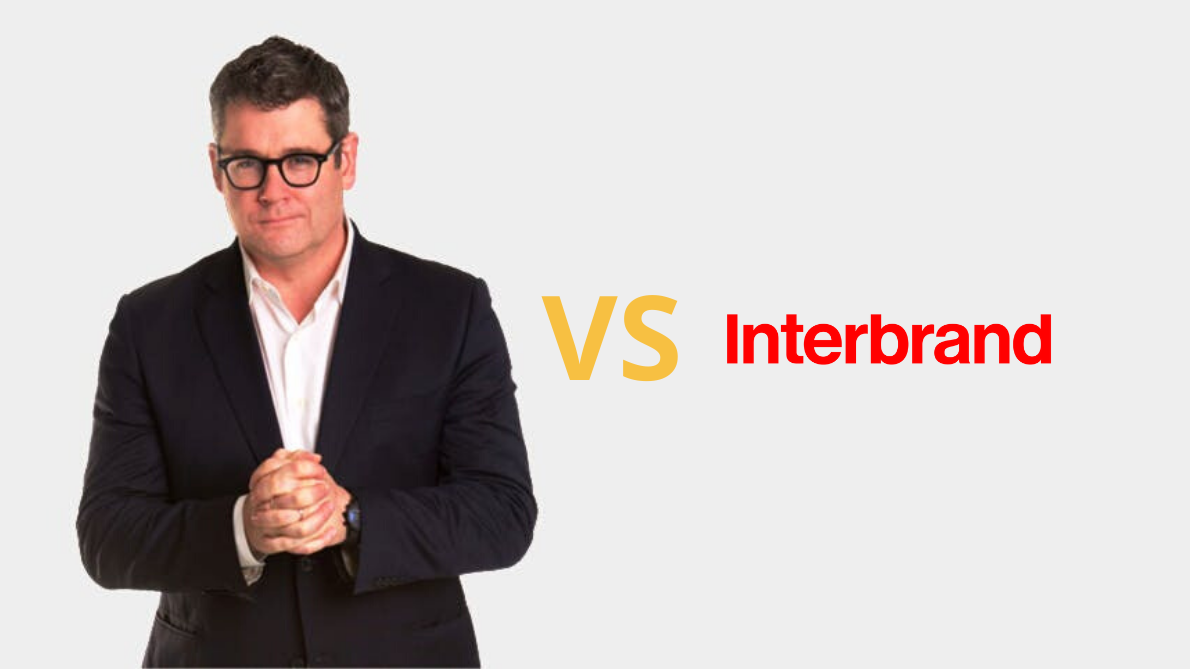 Interbrand, in evoking the 1961 first man on the moon and John F. Kennedy’s 1961 commitment to put a man on the moon by the end of the decade were making a statement, and with the association, they clearly saw it as an epoch defining statement. It was gutsy. Their statement was encapsulated in the article “The End of Positioning: Introducing Iconic Moves”. So how was this JFK evoking proclamation to marketeers received?

The highly regarded Marketing Professor, Mark Ritson was not impressed! In an article in Marketing Week his summary of the was “the strategic content is, well pants”. I had to google to find out the venerable commentator’s meaning of the reference to pants, which I learned it is an Australian colloquialism that means “a total load of rubbish” and that it is “an injunction to wave goodbye to something considered outmoded, unwanted and unnecessary”.

Now Professor Ritson did go out of his way to remind us of the proud history of Interbrand and the role of “legendary brand man” John Murphy and the consulting role he played in advising Rank Hovis McDougall in 1988 when they were threatened with a hostile takeover from Aussie investors who wanted to acquire the revered British conglomerate and sell off its undervalued assets. Accounting standards in the 1980s did not allow the Brand’s value to appear on the balance sheet.

So here we have an ‘antipodean threat’ not to Rank Hovis McDougall but to the Marketing Institution Interbrand, that grew on the back of its legendary advice to the Company. Ritson is scathing, liking Interbrand to the timekeeper for the Olympics 100 metre sprint thinking they can run in lane four against Usan Bolt! He advised them to go back to business school “because another report like theirs risks making it (Interbrand) look like a laughing stock”! Having mocked the venerable institution he even offers them some professional advice – go and talk to your extensive contact list of CMO’s and CEO’s and ask them!

Towards a defence of Iconic Moves

At the risk of being at the receiving end of more antipodean colloquialisms and abuse, I would like to offer a few words in defence of the JFK like the introduction of “Iconic Moves”. However, my reasons for supporting the concept are for very different reasons than those offered by Interbrand and more to do with some of our own experience with Brands and some insight from that other respected Aussie guru, Professor Byron Sharp and the Ehrenberg Institute’s work.

My colleagues and I have spent twenty years looking at the Advertising History of global brands, invariably TV commercials. The Brands were owned by the likes of Unilever, Danone, Nestle, Coca Cola. We also ran a Masters in Global Branding for three years and had the students collect Iconic Advertising from all over the world. We have never had access to the hard data that inform Interbrand, or the Academic World and indeed Ehrenberg Institute. This is some thoughts from some ‘reflective practitioners’.

The Death of Branding

Mark Ritson draws attention to a decade in which as he puts it ‘almost every central concept within the marketing lexicon’ has suffered in ‘being served a death notice’. He refers to research (dead), segmentation (also dead), branding (totally fucked) or TV (so dead). Ritson is pleased with the push back. His fight is for the concept of positioning.

Another wise source, Paul Feldwick, more practitioner than academic, makes similar points in his book ‘The Anatomy of Humbug’. In a chapter “how the Ad Industry thinks about its past’, Feldwick points to two common narratives: The Enlightenment, ‘the past was primitive now we are enlightened’ and The Year Zero Narrative ‘the world has changed (so much) and the old rules no longer apply’. No doubt these dominant narratives play an important role leading to what Ritson describes as ‘established, enshrined concept (being), buried and replaced with ideas hastily written on toilet paper’.

My own take on this is to agree with both Ritson and Feldwick because we consistently see in the Advertising History examples of iconic work. It is as if the Brand Teams are blind to how good some of their historic work is. They move on blindly! And their heritage, their distinctive assets are abandoned.

So in honour of Iconic work we are calling for a “Rebirth of Brand” and suggest the ‘Brand is dead, long live the Brand’. But our call is less in defence of established and enshrined marketing concepts but more in terms of what we see as the nature of Iconic Brands and some of the great Iconic Advertising that was certainly far more evident in the decades before digital and micro measurement.

And we agree with many of Ritson’s Australian colleague, Byron Sharp whose conclusions, based on vast empirical studies reported in ‘How Brands Grow’ challenges many established marketing concepts including positioning, segmentation, differentiation. See Thunder 1, Advertising is most effective when it doesn’t try to persuade. Is there an Australian contretemps going on?

In Defence of Iconic Moves

What I would like to offer is a defence of Interbrand’s “Iconic Moves” moon landing. We too see evidence in advertising histories of these ‘iconic moves’. We also agree with Interbrand in challenging what they call the “dogma of positioning” and that it can be a static category-based abstract concept. We think it can often make more sense to brand and marketing folk than it does to consumers who usually don’t care. Byron Sharp talks about silence and we think that makes more sense.

We do support ‘Iconic Moves’. We have spent years collecting examples of them! We regret that they are a lot less evident than they were in the pre-digital age. However, we would have a very different explanation as to why they work.

Here are some quick explanations of the role and importance of “Iconic Moves”:

Interbrand seek to explain the ‘iconic’ as being because ‘people are moving faster than business’ and they have an abundance of choices, accelerating pace of innovation and shifting frames of reference. Our view is very different. We find that iconic work is best explained by what the great Bill Bernbach of DDB called “unchanging man” and that ‘human nature hasn’t changed for a billion years”. And then Leo Burnett who drew on universal symbols, American history and folklore and non-verbal archetypes.

Our experience has consistently found that the ‘iconic moves’ work because they draw on what Sharp describes as ‘refreshing and building meaning structures’. We see these memory structures as the cultures unconscious mythic and archetypal roots. See my videos, “Myth of Trump” and “Homer Trump”. The 45th President follows Burnett and Homer!

2. From Positioning to Reframing

How positioning works is using consumers perceptual maps. They are invariably the result of research and built on consumers perceptions of product, the competitors and the category. The most significant of these are plotted on two axes and we have an elegant quadrant into which all Brands and competitors can be plotted. It looks great, it is supported by data. And it can work. It can deliver results.

But iconic moves are different. What happens here is that the Brand steps out of the category distinctions. These, by the way, are of considerably less interest to consumers than they are to marketers. The iconic move is always a “better story”. It typically taps into the cultural zeitgeist and what it does is re-frame things for the public.

My favourite is Coke’s “Mean Joe Green”. This iconic piece had nothing to do with positioning in the carbonated soft drinks category. The central tension in the culture at the time was intense racial tensions between black and white. Coca Cola came in, from the perspective of its archetype, the Innocent, the Child and told a brilliant, for me, “Beauty and the Beast” story. Mean Joe wasn’t so frightening after all.

The ‘iconic move’ was a cultural intervention built on a deep sense of the Brand’s archetype and cultural myth. It reframed an issue that was worrying all Americans. It did not reposition Coca Cola vs. Pepsi. That wasn’t bothering the public. Racial tensions were far more top of mind.

I agree with Interbrand that great brands are stories. Yes, they are a compendium of stories. And not just any stories. They are at their most powerful, mythic stories. That’s the one central reason Trump was successful… and could be again in 2020.

Interbrand muse that “tempting as it is to create a science around Iconic Moves, they are by their very nature rare, each being a one of a kind action, arising from unique conditions, decisions and timing”.

Yes, Interbrand, but what’s needed is not a ‘Science of Iconic Moves’ but a ‘Mythology of Iconic Moves’. Were one to attend a Bardic School of Archaic Ireland (and elsewhere) it is possible to identify how this stuff works. An iconic move is like the ‘Sound of Thunder’. It is a noise that is heard above all other noises.

It is Iconic Moves we need. It is a Rebirth of Brands we need. It is more sounds of Thunder. At the moment the best Thunderers are certain politicians! And they seem good at destroying institutions carefully crafted over time….  and the myth on which these great institutions are built.

Here’s to the ‘Iconic Move’. And the hope that Mark Ritson might buy me a bevvie, a frostie, a coldie or a couple of cold ones and we can agree that Interbrand’s latest offering may not be a ‘moon landing’ but it is not ‘pants’ either!