The Myth of Santa Claus - Gifts from the North 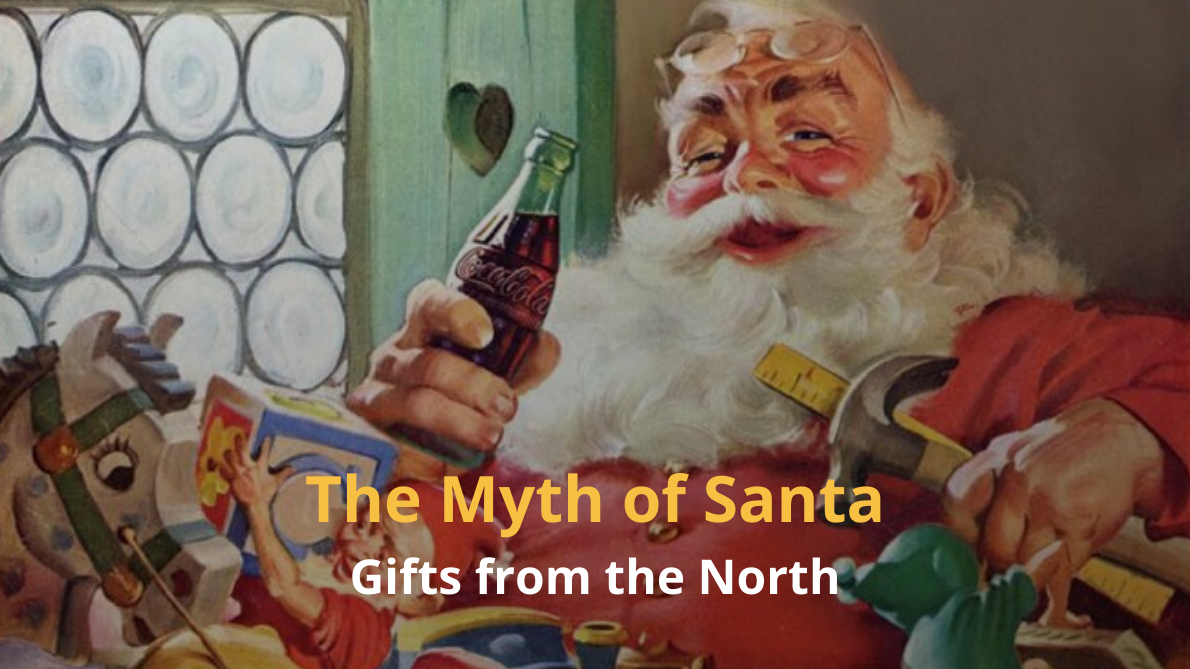 It may sound strange to hear but Santa Claus is a relatively recent happening. Though he would have been central to the Christmas of everyone who is alive today he was crafted in the last two centuries! There are connections to a Greek St. Nicholas but the main invention of this tradition was in Victorian times with a great brand then cementing it as a “myth” in the minds of the world, especially children.

What many do not know is that Santa Claus was originally a large friendly man in a green robe, albeit lined with fur. Charles Dickens also had a great and genial man in a fur coat who takes Scrooge through the bustling streets of London on Christmas morning. See John Leech’s Ghost of Christmas Present which was made for his classic work, A Christmas Carol (1848). Here the coat he wore was also green.

In Norse Countries, the tradition is connected to Odin as an old white bearded gift bringer from the North and rode an eight footed horse called Sleipnir. Odin then transformed himself into Father Christmas, Santa Clause and worked with St. Nicholas and became a central part of Christmas. Odin had a dark cloak with a blue hood.

What then happened was a cartoonist in the American Civil War started to draw Santa Claus for a popular magazine Harpers Weekly in 1862. Here Santa was a small elflike figure who supported the Union. Significantly he changed the colour of Santa’s coat to red.

What really made the difference globally was when Coca-Cola started using Santa in its advertising. They hired an illustrator Haddon Sundblom and started to show Santa himself, not someone obsessed as Santa. In Sundblom’s painting Santa is a friendly, plump and very human figure in a red coat.

Sundblom would paint a Santa picture every year and this was shown in magazines all over the US. Santa was shown delivering toys, pausing to read a letter from the children and, of course, drinking a Coke. He would then visit with the children who stayed up late and they would then go down to visit the fridge and raid some food.

Sundblom’s paintings of Santa, in a sense, were a huge factor in making the Santa we know. The paintings are exhibited in museums all over the world, in Paris, Toronto, Tokyo, Stockholm and Chicago and at Coke Headquarters in Atlanta.

The association of Santa with Coca-Cola continues to this day. The TV ads of the large lorries bringing supplies of Coke to the towns and villages of the world is an important element at Christmas as we know it.

If we go back even further we realise that Christmas has a different relationship to time. One of Europe’s oldest cultures of which we have an oral record did not relate to time as we do today.

The Ancient Irish did not celebrate Christmas. They did have celebrations but they were built around an Irish calendar that was more seasonal. The main events were Imbolg (February), Bealtaine (May), Lughnasa (August) and Samhain (November). This was more connected to the agricultural year and a cycle of rebirth, growth and death and start again. In other words Christianity related to and owned “time” in a very different way.

In Irish Myth, gifts from the North are a recurring theme. In Pre Santa times, the Tuatha de Danann arrived from the North in a great mist. They came from four magical cities: Finias, Murias, Gorias and Falias, bringing great wisdom, science and magic. They also brought four gifts, four magical objects which we will learn about in the New Year. One of the Tuatha Gods has great resemblances to the Santa figure. He is Daghda, a god of hospitality and good fun.

In brand world making, as well as creating central archetypal characters and symbols, other key building blocks include rituals and gestures as well as the relationship between time and place. In the invention of tradition, such as Santa Claus, the art of world making involves assembling something old (the archetype of the kindly father figure), something new (the gifts from the north) something borrowed (Odin and St Nicholas combined and re-imagined into a new figure) and something Blue/Magical (the supernatural travel, the reindeers and the sleigh). And they built on universal truths, the power and art of gift giving!

Great Brands are great world makers! From the scattered fragments of culture, they craft compelling worlds that we “long” to inhabit.