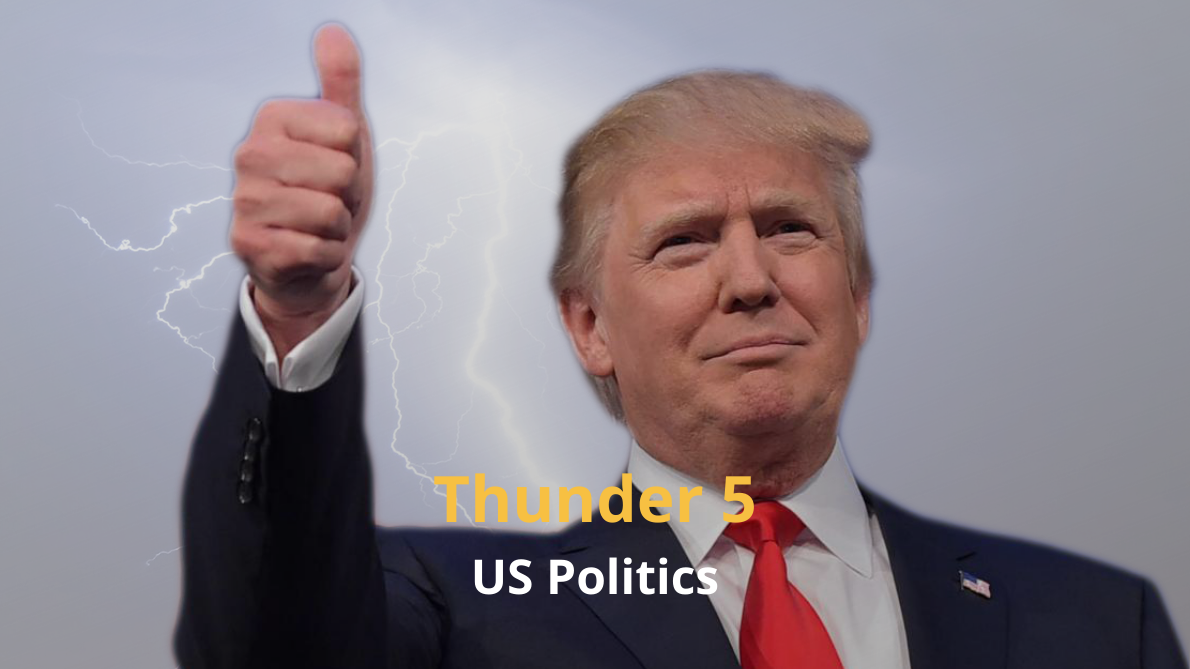 The election of Donald Trump as the 45th President of the United States was, to many, one of the most surprising results in American political history, one could add, in the whole of history. Here was an outsider, with no political experience, with a series of messages that shocked and delighted others at the same time. This was one of the greatest feats of persuasion most of the world had ever seen. How did it happen?

Whether you like his politics or not, there are certain things he has done and is still doing that are masterful. He really does understand modern media and modernity in ways that are extraordinary. In terms of our earlier exploration of the first four Thunders, Trump almost totally ignores the style of persuasion favoured and internalized by all who have been to third-level education and beyond. He didn’t and doesn’t use ‘blue rhetoric’. His opponent did – all the time!

Right at the heart of 45th President’s style of persuasion is his use of a number of the most familiar myths of American culture. We will illustrate these shortly.

The most powerful memory structure in any culture is their foundational stories and myths. These are the stories that everyone in the culture knows. These, as we saw in Thunder 3, are the Cultural Mythographics. They know because they grew up with these stories. The Fifth thunder, then, is to...

Work with the foundational stories and myths of the culture to engage mass audiences.

This appropriation of these myths does not have to be overt. In fact, it is better veiled. But to anyone familiar with these stories, the use if obvious.

Trump is a master of “red rhetoric”! He is a brilliant practitioner of the “Homer School of Branding”.

What will be outlined are the various Cultural Myths that he drew on. Watch my two videos: Myth of Trump and Homer Trump to hear how the “red rhetoric” practitioner operates!

Let us now see what of the foundational myths of US Culture were central to his successful use of red rhetoric.

The Cowboy/strong man and the western is not the only American myth on which he draws. He has, in fact, crafted a ‘compendium of stories’ that together put together a world and a world view that enough Americans wanted to be a part of for him to succeed.

Also evident, is an American religious story. It is Moses, the liberator of the Israelites. You the people are under all manner of imprisonment (government regulation, taxes, global obligations). Only me, Moses, can lead you to the Promised Land! And indeed in the primaries, he made it very clear Jeb Bush would not lead the American people to the Promised Land.

The third cultural myth was his TV series, The Apprentice. For a decade he was delivering arguably the world’s most familiar story, Rags to Riches, poor boy does good. This is the Pygmalion story in ancient myth. In modernity, it is My Fair Lady, Titanic and Pretty Woman. Sometimes it is poor girl does good. In folklore, it is Dick Whittington. In politics, it was Barack Obama – from poverty in Africa to the White House in a generation.

The American compendium is another recurrent American story. It is ‘Rot at the Top’. It is deeply rooted in American history. it is a primary reason as to why they left their homeland in Europe. This is about an inherent suspicion and distrust of government. It is the plot of House of Cards and Mr. Smith Goes to Washington.

And finally, in the compendium of cultural myths was another very familiar to American Culture, and indeed global culture – the "Mob at the Gates". This works by creating an imagined aggregated other, described as an invading mob, there to take your job, your family, your way of life. It is the plot of the Alamo (Mexicans), Star Wars (Darth Vader and the Empire) and Independence Day.

Taken together we have five of the most recurrent foundational Myths of American Culture appropriated by a master storyteller, a master of red rhetoric. He was working by a different set of principles. Hilary, in the 2016 election, didn’t even engage at a mythic level except to do a ‘not Trump’ myth. Sports psychologists will tell you double negatives don’t work!

What we have learned from Thunder 2 is that ”you can’t change feelings with facts” and “people feel before they think”. What this means is the only thing that can challenge a dominant story is a better, more relevant story. We will be looking in further posts at what can be done to confront a dominant narrative and such an outstanding “myth teller”. In short, only better red rhetoric beats powerful red rhetoric!